A great prayer exercise for those involved in sacred music is to meditate on the texts of the propers (the changing prayers of the Mass) using the chant.

The western chant repertoire of the Church is an amalgamation of chants belonging to the different western rites, the final corpus being delineated by Pope Gregory the Great in the late 9th Century- giving it the nickname ‘Gregorian Chant.’ It would be a mistake to think that this is the beginning of the chant repertoire- the same mistake as thinking that the Tridentine Mass originates from the Council of Trent which simply codified and standardised the Latin Rite which can be traced back to the Apostles.

The chant repertoire is truly ancient with evidence dating some pieces to the early centuries after the death of the Lord and some even containing melodies that date back to the synagogue and which Jesus would have been familiar with (The Tonus Peregrinus for the last psalm at Sunday Vespers for example.). This post isn’t about the history of chant but about the true origin of the music, the final cause if you will.

I continually write about my belief that the chant repertoire is a result of meditation on the text and that it is the fruit of prayerful meditation– Lectio Divina in music.  Beyond the beautiful simplicity, evocative modality and illuminative word painting, I believe that chant of the Church is divinely inspired by the Holy Spirit, the song of the Bride to the Bridegroom, expiring sighs of prayer  throughout generations.

The following is not meant to be an expert musical analysis but just some prayerful insights from having sung through the chant. Even for those who have no musical knowledge, the text enlivened by the music carries the implicit resonance of truth and beauty. 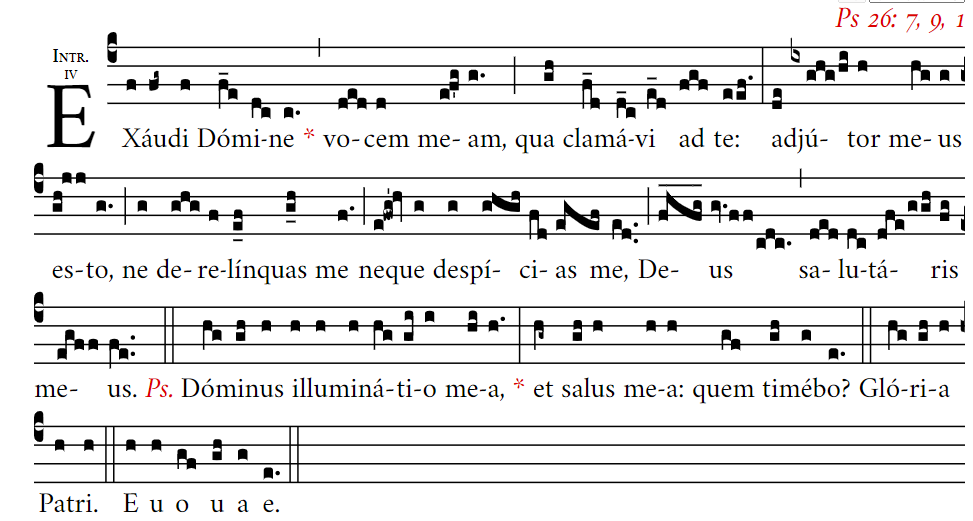 These are merely what occurred to me today and like the scriptures themselves, new lights penetrate our should each time we revisit them.

Clergy- Take measures to put this rich sung prayer of the Church in ‘pride of place’ in the liturgies in your parish. Whether appreciated explicitly or implicitly, the Chant is the song of Heaven and resonates in the soul of all who hear it. If you don’t know where to start, email me!