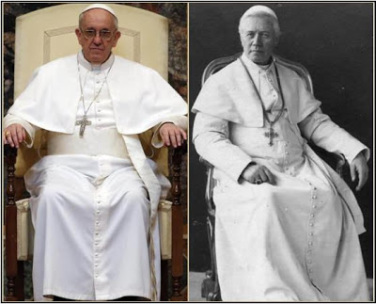 Pope Francis addressed the 140 year old Italian Association of St Cecilia on the 28th of September.

His remarks are bang in line with the teaching of St Pius X and Pope Pius XII in calling for a liturgical music that is set apart- holy, has ‘goodness of form’ and is universal. Pope Benedict XVI also endorsed the teaching of the Popes Pius that Gregorian Chant is the repertoire that fulfills those criteria supplemented by the rich polyphonic repertoire of composers such as Palestrina. Pope Francis also follows his predecessors in encouraging the establishment of a schola cantorum in each parish and for the composition of new repertoire in keeping with the principles of sacred music. St Pius X went further saying that the Cathedral of each diocese should be a centre of musical excellence that could resource the parishes of the area. I’ll let you evaluate the extent to which this has been achieved! The universality of the chant is that it is one fixed corpus of works across that Latin rite (more or less) and in the use of the Latin language which transcends the barrier of vernacular languages.

It is, of course, the role of the Pope never to teach anything new but to confirm the brethren in the faith by presenting the unchanging deposit of faith to each generation.

Many thanks to Richard Chonak at Chant Cafe for his English translation of the Pope’s address.