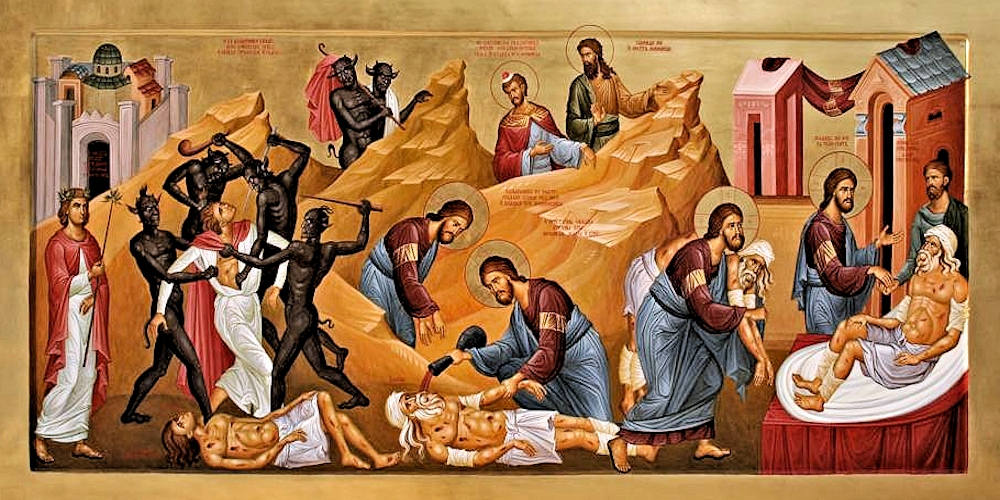 In a climate of increasing secularism and religious pluralism, the necessity of Catholicism is unclear to many. The parable of the Good Samaritan is commonly used to illustrate the Golden rule which is held as common to most religions: that we should treat others as we want to be treated ourselves. While this ethical interpretation is valid and laudable, the Saints and Fathers of the Church remind us that to care only for the temporal needs of others is to expect them to ‘live by bread alone’ and that physical wellbeing is only part of the way to spiritual restoration. I will attempt to demonstrate that this redemption is only possible through the redeeming work of Jesus Christ and this extended to all people in all ages by His Catholic Church.

St Augustine begins the allegorical and spiritual interpretation by revealing the significance of the journey that the man, representing all of mankind, was taking from “Jerusalem, the city of peace, that heavenly country” (Augustine, In Aquinas. online) to “Jericho [which] is interpreted to be the moon, and signifies our mortality, because it rises, increases, wanes, and sets.”(Augustine, In Aquinas. online) The Jerome Bible Commentary mentions the geographical descent from Jerusalem to Jericho, emphasising the idea that the man was descending from a state of grace to a state of sin. This is compounded by the attack of robbers who strip him. St Basil’s analysis compares the incident to the fall of our first parents in his comment “wounds precede nakedness, as sin precedes the absence of grace.” (Basil, In Aquinas. online) Saints Ambrose and Augustine agree that the stripping of the man’s garments symbolises his being stripped of the garment of supernatural grace and freewill by ‘the Devil and his angels’ (Augustine, In Aquinas. Online).These surely are the deepest wounds, to be stripped of the dignity that is ours as created in the image of God, to be robbed of our immortality by sin: to be alive in body but in mortal sin is to be half dead.

Some interpret the passing of the Priest and the Levite as the general failure of religion to care for the man, furthering the argument that religion is not necessary for altruism. (Stuhlmueller, in Brown, Fitzmyer and Murphy, 1968:144) Ratzinger makes a comparison between the Jewish religion of the time and the effect of Christ’s redemptive work which brings true healing. “Priest and Levite pass by; from earthly history alone, from its cultures and religions alone, no healing comes.” (Ratzinger, 2007:200) Here we see the necessity of divine assistance if we are to recover from our wounded state. This is not to be found in secular philanthropy. Neither is it to be found in any other religion for even St John Chrysostom sees in those passers-by a representation of Moses and the Law (In Aquinas. online) and St Augustine fortifies this saying that both the sacrifices of the Old Covenant and the Law “could not heal, because by the Law came the knowledge not the doing away of sin.” (Augustine, In Aquinas. online)The central issue here is the necessity of the redemption that is only found in the sacrifice of Calvary, no other religion or lack thereof is salvific.

The identity of the Samaritan is key to understanding the parable. St Ambrose writes of “the Good Samaritan, who is the guardian of souls..” (Ambrose, On Repentance 1 Ch11 Online), which is supported by St Augustine who interprets ‘Samaritan’ as ‘Keeper’ in comparing the care of the Samaritan to God in Psalm 121 saying “Behold he shall neither slumber nor sleep, that keepeth Israel. The Lord is thy keeper, the Lord is thy protection upon thy right hand.” (Psalm 120: 4-5 DR) St Ambrose, then, brings this together when he says “Now this Samaritan was also coming down. For who is he that ascended upon into heaven, but he who came down from heaven, even the Son of Man who is in heaven.” (Ambrose, In Aquinas. online) We see therefore that the Samaritan is Jesus Himself, the keeper of souls who descended from Heaven so as to lead us to the New Jerusalem.

Ratzinger comments on the compassion of the Samaritan by highlighting the original Hebrew word used which connotes maternal care (Ratzinger, 2007:197). This familial metaphor reinforces the description of the burning charity that is found in the very Heart of Jesus that is uncompromising and concerned for each wounded soul. Such is Jesus’ love for us that “…when He came He was made very near to us by His taking upon Himself our infirmities, He became a neighbour by bestowing compassion. Hence it follows, And when he saw him he was moved with compassion.” (Ambrose, In Aquinas. online) We see this in the logo for the current Year of Mercy in which Christ takes the weakness of each of us upon Himself. Here we gain great insight into the very person of Jesus Christ.

Once again the saints draw us into a deeper understanding of the depths of Christ’s love in their reflection on the nature of the care that the Samaritan gave to the poor man. Not only was this corporal mercy but spiritual mercy which flows from the grace found in the Sacraments of the Church. The Samaritan does not clean the man’s wounds with water but “..he poured in wine, that is, the blood of His passion, and oil, that is, the anointing of the chrism, that pardon might be granted by His blood, sanctification be conferred by the chrism. The wounded parts are bound up by the heavenly Physician, and containing a salve within themselves, are by the working of the remedy restored to their former soundness.” (Chrysostom, In Aquinas. online)

The Samaritan takes the wounded soul to the Inn, a place of healing where we are treated and cured and where, as St Augustine puts it, we as travellers in this world find a home until we reach our destination, the Kingdom of Heaven. (St Augustine Sermon 81 online) “For the Inn is the Church, …[where]the wearied traveller casting down the burden of his sins is relieved, and after being refreshed is restored with wholesome food. And this is what is here said, and took care of him. For without is everything that is conflicting, hurtful and evil, while within the Inn is contained all rest and health.” (Chrysostom, In Aquinas. online) This has been re-presented in our own time by Pope Francis who has collected these truths in his image of the church as a “field hospital”.

This issues us, as members of the body of Christ, with a challenge to be the hands with which God blesses the world. (St Teresa of Avila) If we are to fully live the spiritual and corporal acts of mercy, we must learn to practice a Caritas which imitates that of the Sacred Heart of Jesus. The totality of this love exceeds temporal need. This love speaks the truth that sets us free, it is impartial, generous and seeks, above all, the salvation of souls. It seems to me that we cannot divorce the message of this parable form the great commission that is to be Apostles who bring Christ to all nations. “Blessed then is that inn-keeper who is able to cure the wounds of another; blessed is he to whom Jesus says, Whatsoever you have spent more, when I come again I will repay you.” (Ambrose, In Aquinas. Online) We face the challenge which Jesus gave to the questioning lawyer, ‘Go and do likewise.’