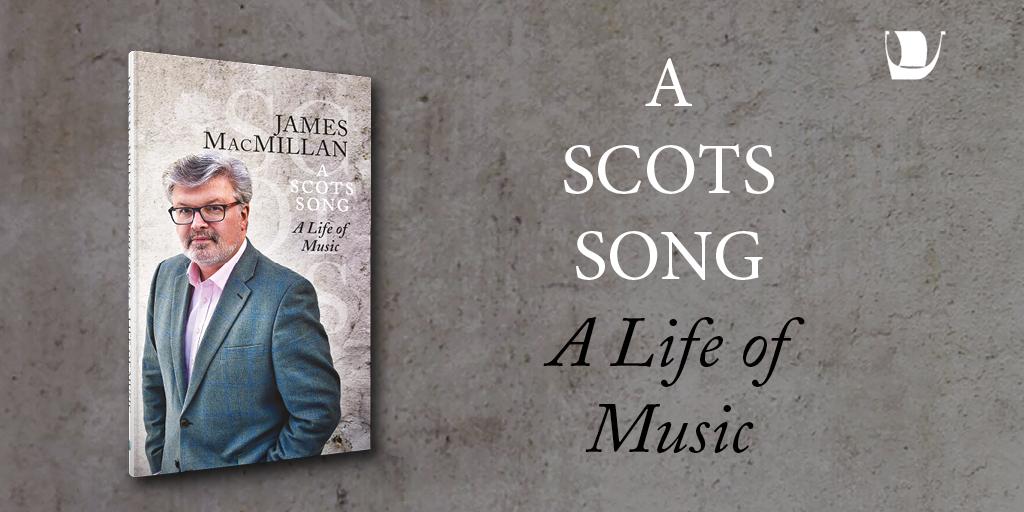 Amazon is clever and has got to know me over the last few years. She is so astute, in fact, that she suggested James MacMillan’s autobiography to me before it was even available. As a music student I was aware of MacMillan’s work and came across some of his liturgical music. Even before I became Catholic, I had excitedly shared his earth-shattering Tu Es Petrus with friends around the time of Pope Benedict’s visit in 2010. The first time I sang chant as at the Musica Sacra day in 2014, the year before I was received into the Church. In some ways, MacMillan has influenced me more than I had realised.

One of the initial formative musical experiences which sparked the artistic flame within MacMillan was at St Mary’s Cathedral, Edinburgh. Although he does not remember the specific piece or composer, the sacral flow and ebb of what was probably chant and polyphony made something of an indelible mark on his soul. In my work with young people, I have observed the profound effect which the ‘otherness’ of sacred music can have and the disastrous effect that cheap knock-off entertainment music has on the sense of the sacred.

My experience has been that, whatever the genre, young people sense and respect something that has authenticity and integrity. While I am sure that my pupils do not listen to Gregorian Chant for fun, they certainly appreciate it’s intrinsic holiness and peacefulness when we use it in times of prayer in class . They have told me so. They know that is not music for casual consumption but it is set apart for the worship of God. It is timeless and unemotional and free from the dictats of fashion and preference. This is a reminder to music directors, teachers, clergy and parents that children soak in non-verbal communication and when they are given the opportunity to expand their understanding, they rise to the challenge- we should expect more and support more rather than lowering everything to the level of the banal.

Another theme throughout the book which interests me is that of tradition, not only in a liturgical sense but in music and in life. Sir James writes about his search for his own voice as a composer and he describes how hostile the musical atmosphere was, in the 1980s, to the use of any material particular to an individual country in new music. Years later, many would recognise MacMillan’s sound world through his use of celtic modes, influences of pibroch ornamentation and of course chant. Yet, his music is modern. This reminded me of a point made by Pope Pius XII in Mediator Dei 1947 where he makes a distinction between tradition as a living passing on of, in this case, the faith and mere antiquarianism where we cling to something that is old. Gustav Mahler put it that tradition ‘is not the preservation of the ashes but the handing on of the fire.’ MacMillan talks about a ‘starting from scratch’ after the Second World War where a new beginning was sought. I couldn’t help but draw a parallel with the situation in the Church where for many, a fresh start was called for at the Council and the previous nearly two millennia were regarded as outdated and had little to offer the new world. It seems to me that both in the liturgy and in our way of life, we should hold tradition dear, learning from what has gone before and passing this on to generations to come.

A motif emerges in the last portion of the book- 4.33. For those who are not initiated in the often bizarre world of twentieth century post-modernist music, this refers to a piece ‘written’ by John Cage. Much of Cage’s work involves experimentation with radio sets and plucking mic’d up catusses with feathers- not my idea of the true, the good and the beautiful. One piece I have always appreciated is 4.33- which comprises of 4 minutes and 33 seconds of silence. On a functional level, it is interesting to think that this piece will be different every time it is experienced but MacMillan sees a different angle. He suggests that Cage devised the piece as a radical protest against our culture of noise, confronting people with a period of silence the length of which is roughly the same as the consecration in the traditional Mass, which cage once sat in on. The motif of 4.33 then becomes MacMillan’s shorthand for silence and prayer in our busy lives and comes to a climax when he describes the times that he spent gazing into the eyes of his sadly departed granddaughter. I think that we all must learn that in a world where we are the sum of our usefulness and productivity, where Scottish children are referred to as the ‘young workforce’, the dignity of human life and our true worth is found in 4.33.

In this short volume, MacMillan exemplifies his own model for how we can ‘re-sacralise’ the world and the culture. Through his musical and personal reflections, vital philosophical and anthropological observations shine through. Without using terminology which would raise the hackles of many, he subtly introduces sound concepts like the importance of real community, the role of tradition in passing down the wisdom of previous generations, the dignity of human life and the dangers of replacing God with pseudo-spiritual experiences. Following this model, we can all reflect on how we can explicitly and implicitly witness to the truth in ways that will introduce others to the metaphysical without falling into the modern vacuum of tolerance and conversation. Rather like St Paul preaching the ‘Unknown God’ we must find ways of recognising what is good and using them as signposts to their ultimate fulfillment, God Himself.