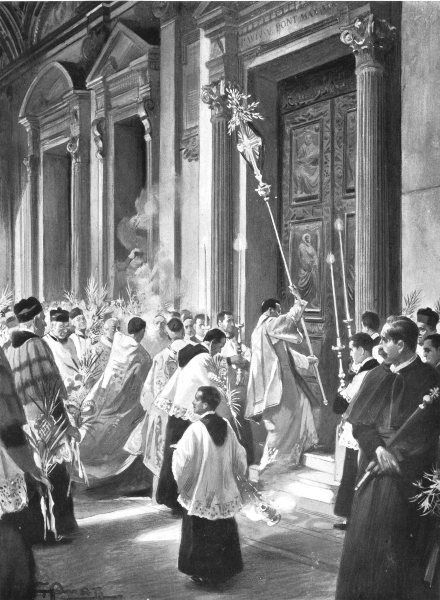 The next liturgical text that I would like to share is one of those used for the procession on Palm Sunday – Gloria, Laus et Honor Tibi Sit.

A hymn to Christ the King, the text tells of the jubilation of the people of Jerusalem at Our Lord’s triumphal entry and the continual praises sung to the Redeemer by all the angels of Heaven. The origins of this hymn are interesting. Around the year 820AD Theodulf, Bishop of Orleans was imprisoned in the monastery at Angers and as King Louis the Pious was passing in procession on Palm Sunday of the year 821, Theodulf sang the newly composed hymn from his window. The king was so touched by the hymn that he had the bishop released at once! Some disbelieve this story- that’s up to them!

Despite the reforms of the Holy Week liturgies in 1955 and since the promulgation of Pope Paul VI’s Missal, the hymn has been retained. Until the reform of 1955 the hymn was sung in alternatum between the people waiting to re-enter the church at the end of the procession and the choir inside the church. The symbolism is of the Lord’s entry into Jerusalem and also of the entry of the Church militant into the heavenly New Jerusalem. When the doors open, the voices of the people join with those of the choir, who represent the angels, in the praise of Christ the King. In the later rites, the hymn is just sung for the procession.

Recent use at St Peter’s